Truth Truck Helps Save Two Babies From Tiller’s Mill On Monday – One In The 33rd Week Of Pregnancy! 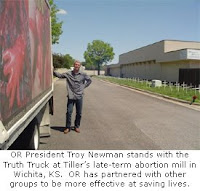 Sidewalk counselor Jennifer McCoy had a great day of ministry outside George Tiller’s late-term abortion mill in Wichita on Monday.

Jennifer intercepted a couple from Ohio who were coming out of Tiller’s abortion mill early in the afternoon. She persuaded them to go next door to Choices Medical Clinic, a pro-life center that offers help to pregnant women.

Source for article and photo Operation Rescue
Posted by EC Gefroh at 9:40 AM No comments: Links to this post 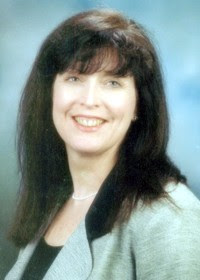 Pro-life ministry leader Janet Morana will speak on August 18, 7:00 PM, at International (Baptist) Church. The church is located along the Pali Hwy. at 20 Dowsett Ave., Honolulu; free parking on site. Morana will discuss her work with the Silent No More Awareness Campaign, a post-abortion recovery ministry. Admission is free and open to the public; childcare not provided. The event is being sponsored by Hawaii Right to Life.

Morana is co-founder of the Silent No More Awareness Campaign, a national effort that informs the public about the devastation that abortion causes and helps those facing an unplanned pregnancy to understand the long-term consequences they are likely to face. Through her work with those in abortion recovery and her own abortion experience, Morana understands the need to let the public hear from those who regret their abortions and know firsthand its harmful effects. A major goal of the Campaign is to break the silence surrounding the emotional, physical, and spiritual pain caused by abortion to put individuals on the path to healing.

Women and men across the U.S. and abroad are recovering from the damaging effects of abortion through the ministry of the Silent No More Awareness Campaign. Many who have been helped by the ministry are reaching out, sharing their personal experiences, so that others may also begin the post-abortion healing process. The Campaign is a non-denominational Christian effort that has no political or legal agenda.

National Catholic pro-life champion and spokeswoman Janet A. Morana will be on Oahu this month for a string of speaking engagements.

Morana is the associate director of Priests for Life and assistant to the national director, Father Frank Pavone. She is also co-founder of the Silent No More awareness campaign, a national effort to help women who have had abortions share their testimonies.

For the rest of the article as well as for the speaking engagement calendar, be sure to visit The Hawaii Catholic Herald
Posted by EC Gefroh at 9:31 AM No comments: Links to this post

Humanae Vitae and Some "Catholic" Groups

2008 marks the 40th Anniversary of Humanae Vitae and sixty-three so-called catholic organizations believe they can undo 2000 years of Church teaching.

Posted by EC Gefroh at 9:26 AM No comments: Links to this post

Posted by EC Gefroh at 9:30 AM No comments: Links to this post