Washington, DC (21 August 2008) – Today, Planned Parenthood Southwest Ohio Region announced that it has launched the "'A' Word Campaign" and its new Web site for teens, www.theawordohio.com. The campaign is set to hit the Cincinnati area just in time to coincide with the nation's largest abortion giant's push to open a new killing center just down the street from Western Hills High School, which has a high percentage of minority students.

"In this case, Planned Parenthood is right," Jim Sedlak, vice president of American Life League, commented. "Planned Parenthood is definitely involved in more than abortion: It's also deeply invested in sexualizing the youngest of our children so that they'll be lifelong dependents on Planned Parenthood's lucrative contraceptive and sexually transmitted disease services as well."

"The 'A' Word Campaign and the Take Care Down There web site are part of a larger national trend - Planned Parenthood wants your kids and is willing to invest big in marketing promiscuity, pornography and sex products to get them," Sedlak continued.

American Life League was cofounded in 1979 by Judie Brown. It is the largest grassroots Catholic pro-life organization in the United States and is committed to the protection of all innocent human beings from the moment of creation to natural death. For more information or media inquiries, please contact Katie Walker at 540.659.4942.

Michelle Malkin was there
Posted by EC Gefroh at 4:07 PM No comments: Links to this post

Email ThisBlogThis!Share to TwitterShare to FacebookShare to Pinterest
Labels: Protests

Posted by EC Gefroh at 3:50 PM No comments: Links to this post 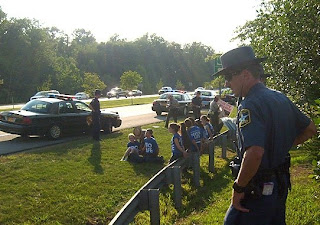 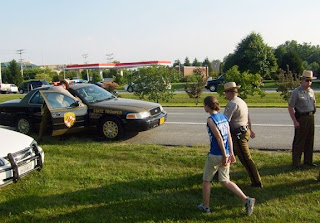 On Aug. 1, 18 pro-lifers were falsely, brutally arrested on bogus charges by Maryland state police officers. Most were scared, crying teenage kids. They weren't told the charges for which they were being arrested and they weren't read their Miranda Rights. The girls were humiliatingly searched, and all were locked up. Most weren't allowed to see their lawyers and were denied their phone calls.

This is one of the largest mass arrests of pro-lifers since the days of the clinic rescue movement which ended in the early 1990s. It's a clear violation of First and Fourth Amendment rights.

It's being ignored in a massive media blackout.

"This type of harassment has been used against peaceful protestors in the past and never have these tyrannical methods been acceptable," said Jen Catelli, director of media relations at American Life League. "The pro-life community needs to stand up and demand media attention for these heinous abuses."

Defend Life's Maryland Face the Truth Tour had one final stop to make in Hagerstown, Maryland. They peacefully set up their signs along a stretch of highway and began to pray. State police officers soon showed up and demanded they take down their signs. The pro-lifers complied and moved to a different area.

"They violated all our rights," said Jack Ames, president and founder of Defend Life. Ames spent the night locked in a cell with the other pro-lifers. Ames and his fellow pro-lifers spent the night praying and singing the Lord's Prayer, the Ave Maria and Tantum Ergo. The next morning officials released the pro-lifers. Charges have since been dropped.

"American Life League is committed to making sure these people get the attention they deserve," Catelli said. "This kind of blatant disregard for pro-lifers' rights on the part of Governor Martin O'Malley's state police won't be tolerated. If these pro-lifers were pro-abortion activists or PETA protesters, this would have been on the front page of every newspaper on the East Coast."

"As more information surfaces about this mass arrest, ALL will ensure that everyone in the pro-life movement hears about these heroes," Catelli continued.

American Life League was cofounded in 1979 by Judie Brown. It is the largest grassroots Catholic pro-life organization in the United States and is committed to the protection of all innocent human beings from the moment of creation to natural death. For more information or media inquiries, please contact Katie Walker at 540.659.4942.

Posted by EC Gefroh at 9:41 AM No comments: Links to this post

When the Supreme Court handed down its decision in the Roe v. Wade case allowing virtually unlimited abortions, pro-life advocates talked of a slippery slope. They said the decision would lead to a devaluing of human life and that is apparently what has happened as new figures show adoptions decreasing.

LifeNews' Article
Posted by EC Gefroh at 9:34 AM No comments: Links to this post

One of the nation's top pro-life organizations is asking pro-life advocates to contact the American Psychological Association and urge calls and emails concerning its recent abortion report. The APA dismissed insurmountable evidence that abortion causes mental health problems for women.

LifeNews' article
Posted by EC Gefroh at 9:32 AM No comments: Links to this post

Can you ever get over an abortion?

Hat tip to Jackie
Posted by EC Gefroh at 2:23 PM No comments: Links to this post

Since the U.S. Supreme Court decided Roe v. Wade and Doe v. Bolton in 1973, 49,640,776 babies have been surgically and medically aborted – millions more have been killed chemically. This staggering death toll is the direct result of these two decisions.

On the first Monday in October, the U.S. Supreme Court begins its new term. This is a day on which pro-lifers across the nation will mourn the victims of America's hidden holocaust: abortion.

Who will hear the cries of these preborn children? Who will be their voice? Who will mourn their deaths? On October 6, thousands of Americans nationwide will be mourning the victims of abortion by wearing black armbands, gathering for prayer and candlelight vigils at the U.S. Supreme Court and abortion facilities nationwide, wearing the official Pro-Life Memorial Day 2008 T-shirt and engaging in many other activities.

Here at ProLifeMemorialDay.com you can register to participate, purchase the armband and shirt, post your stories and event photos, and do so much more to remember the preborn children none of us ever got the chance to meet.

Visit the ALL Pro-Life Memorial Day website
Posted by EC Gefroh at 11:05 AM No comments: Links to this post