Boise, ID (LifeNews.com) -- The Komen for the Cure organization that sponsors events to combat breast cancer has teamed up with a business that does abortions, which have been proven to increase a woman's risk for contracting the disease. The move in Idaho is the latest in the link between Komen and Planned Parenthood.

On Friday, Komen teamed up with Planned Parenthood of Idaho to offer breast cancer screenings in Twin Falls and information about breast cancer. About a dozen women scheduled screenings, according to the Magic Valley Times-News and they were done at the abortion business. "The main goal is to provide clinical breast exams and mammography to women for free," Suzanne Edelman of Planned Parenthood told the newspaper.

Komen essentially paid Planned Parenthood for the breast cancer exams that, without its financial input, would have cost women $70. Although there are nothing wrong with breast cancer screenings, pro-life advocates are disappointed a group that is concerned about breast cancer would team up with an abortion business, especially since research shows abortions increase the risk.

A new video released in February, "Komen's Dark Side," exposes the irregular relationship between the breast cancer organization and Planned Parenthood. The video reports on the cover-up of the abortion-breast cancer link.

"Komen's officials have no right to keep women in the dark about a breast cancer risk, while at the same time giving funds to Planned Parenthood, a primary cause of the breast cancer epidemic," says Karen Malec, the head of the Coalition on Abortion/Breast Cancer.

"The cancer fundraising industry is covering up the link, in part, because it is not good for fundraising to tell donors their abortions may be responsible for their breast cancers," Malec added.

Baruch College professor and renowned researcher Joel Brind, Ph.D., one of the world's leading experts on the link between abortion and breast cancer, says that the link between the two is real and that studies back up his assertion that carrying a pregnancy to term reduces the risk.

"That’s what the big research argument is about: does abortion increase the risk of breast cancer beyond not getting pregnant in the first place? And the answer is yes," Brind says.
Brind explains that the reason for the link is "obvious" in that "once a woman gets pregnant, her breasts start growing within days or a week or so after getting pregnant. So the number of those Type 1 and Type 2 lobules where breast cancer can form are multiplying and so there are more places where cancer can start as the pregnancy proceeds."

"Well, once 32 weeks pass, all those Type 1 and Type 2 lobules become Type 3 and Type 4 lobules so you actually have fewer places for cancer to form than before the pregnancy started. But if a pregnancy is aborted before the 32-week mark, the risk for breast cancer goes way up from where it would have been even if a woman hadn't gotten pregnant in the first place," he said.

While much of the focus of the debate is on the abortion side of the breast cancer issue, Brind says there is little controversy about the fact that pregnancy helps women. "No one argues with the fact that when a woman has a full-term pregnancy, breast cancer risk goes down," he said.

For more information on the abortion-breast cancer link, visit the Breast Cancer Prevention Institute’s web site at http://www.BCPInstitute.org
Posted by Island Livin' at 8:06 PM No comments: Links to this post

Washington, DC (LifeNews.com) -- The big question regarding the nomination of appeals court Judge Sonia Sotomayor to the Supreme Court is whether she will uphold the Roe v. Wade case that allows virtually unlimited abortions. A prominent pro-life attorney says he thinks a legal brief from a group Sotomayor supported provides some direction. Full story here.

Posted by Island Livin' at 8:02 PM No comments: Links to this post

Posted by Island Livin' at 8:00 PM No comments: Links to this post

WASHINGTON -- June 8, 2009 -- The U.S. House of Representatives is expected to vote on or about Wednesday, June 10, 2009, on a pro-abortion foreign relations bill that is opposed by National Right to Life and other pro-life groups.

Please take a few minutes to contact the office of your U.S. representative, urging him or her to oppose the bill, titled the "Foreign Relations Authorization Act" (H.R. 2410). This bill would provide congressional authorization for many activities run by the State Department, which is currently headed by Secretary of State Hillary Clinton, a strong pro-abortion advocate.

Section 334 of the bill would establish an Office for Global Women’s Issues, headed by an official with the rank of ambassador-at-large, who would report directly to Secretary Clinton. This high-ranking official and her new sub-agency would be charged with promoting “women’s empowerment internationally.” For more information and to get the name and phone number of your congressional representative, click here.

Posted by Island Livin' at 7:36 PM No comments: Links to this post

You Won't Believe this 1964 Ad from Planned Parenthood 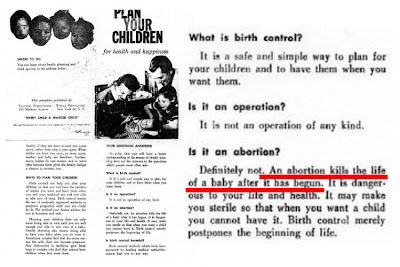 H/T Sue of Half the Kingdom

Posted by EC Gefroh at 2:46 AM No comments: Links to this post