“We do not know the motive yet. But this is a time to console one another, and to renew our determination to organize peaceful protests. It is no time for fear. And I am waiting to hear the abortion advocates condemn this killing.”

Posted by EC Gefroh at 12:35 PM No comments: Links to this post 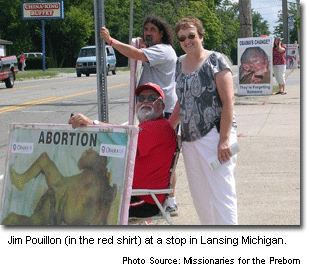 This morning at 7:20am James Pouillon, an elderly Michigan-area pro-life activist, was gunned down in front of Owosso High School while protesting abortion with a large sign depicting a baby and the word "Life." A second man was also killed shortly thereafter - Mike Fuoss, the owner of a local gravel pit. It is so far unknown what the motives for the two killings were.

Posted by EC Gefroh at 12:24 PM No comments: Links to this post

WASHINGTON - The National Right to Life Committee (NRLC), the nation's largest pro-life group, today responded to the shooting death of James Pouillon in Owosso, Michigan. Mr. Pouillon was reportedly shot while standing outside Owosso High School holding a sign with a picture of a baby and the word "LIFE." Police believe a second homicide nearby may be linked and a suspect is in custody. The following statement may be attributed to NRLC Executive Director David N. O'Steen, Ph.D.:

We are saddened to learn of this tragic taking of innocent human life. National Right to Life extends its sympathies to Mr. Pouillon's family over his death. While the motive behind the shooting is unknown, we know that Mr. Pouillon was known for his stand against abortion.

The National Right to Life Committee unequivocally condemns acts of violence. The pro-life movement works to protect the right to life and increase respect for human life. Any unlawful use of violence is directly contrary to that goal.

NRLC has always been involved in peaceful, legal activities to protect human lives threatened by abortion, infanticide and euthanasia. We always have and will continue to oppose any form of violence to fight the violence of abortion. NRLC has had a policy of forbidding violence or illegal activity by its staff, directors, officers, affiliated state organizations and chapters. NRLC's sole purpose is to protect innocent human life.

NRLC will continue to work through educational and legislative activities to ensure the right to life for unborn children, people with disabilities and older people. NRLC will continue to work for peaceful solutions to aid pregnant women and their unborn children. These solutions involve helping women and their children and do not involve violence against anyone.

Posted by EC Gefroh at 12:21 PM No comments: Links to this post

Posted by Island Livin' at 1:41 AM No comments: Links to this post

A woman gains protection from breast cancer by completing a full-term pregnancy. In utero, her offspring produce hormones that mature 85 percent of the mother’s breast tissue into cancer-resistant breast tissue. If the pregnancy ends through an induced abortion or a premature birth before thirty-two weeks, the mother’s breasts will have only partially matured, retaining even more cancer-susceptible breast tissue than when the pregnancy began. This increased amount of immature breast tissue will leave the mother with more sites for cancer initiation, thereby increasing her risk of breast cancer. Hormonal contraceptives increase breast-cancer risk by their proliferative effect on breast tissue and their direct carcinogenic effects on DNA. Hormonal contraceptives include estrogen-progestin combination drugs prescribed in any manner of delivery: orally, transdermally, vaginally, or intrauterine. This article provides the detailed physiology and data that elucidate the mechanisms through which induced abortion and hormonal contraceptives increase breast-cancer risk. Read more.

Posted by Island Livin' at 1:31 AM No comments: Links to this post

Aloha Pregnancy Care and Counseling Centers will have their annual fundraising banquet on Thursday, October 22, 7:00-9:00 pm at the Dole Cannery Ballroom. The event features Father Marc Alexander as the main speaker with Pastor Ashley Sepulveda giving a special testimony. The banquet planning committee is looking for underwriters and table hosts for the approximately 30 tables available.

The shedding of innocent blood is a sin in the eyes of Almighty God, and how much more innocent and vulnerable is an unborn child in the womb of its mother. Jeremiah1:5 says, "Before I formed you in the womb I knew you; Before you were born I sanctified you; And I ordained you a prophet to the nations."

Please help protect the unborn by having anyone interested in attending or helping with the banquet email info@hi-christian.com. The slaughter of innocent babies must not be allowed in a civilized nation!
Posted by Island Livin' at 1:22 AM No comments: Links to this post

Hawaii Right to Life is a nonprofit organization promoting respect for human life from conception to its natural end. Join our mission and make a difference as a volunteer, part-time Education Coordinator.

The Education Coordinator arranges presentations with O'ahu schools, churches, and others to share the pro-life message in our community. Hours are flexible and you can volunteer from home! Contact Hawaii Right to Life at 585-8205 or hrtlprolife@yahoo.com.
Posted by Island Livin' at 12:38 AM No comments: Links to this post

Abortion: the Deadly Side of Vaccines

Another downside to abortion is the use of fetal cells in making vaccines. The National Vaccine Advisory Committee has recommended further study of vaccine safety.

Although mercury in vaccines has been ruled out as a causative factor in childhood autism, the autism rate is still rising (on out of every 64 children). The autism rate began to rise in 1979 and spiked upward in 1983. After 1983, the new vaccine, MMR II, was produced using aborted fetal cells. Mercury was not present in these vaccines.

Today, more than 23 vaccines are contaminated by the use of aborted fetal cells and residual aborted fetal DNA. There is no law that requires the vaccine manufaturer to disclose the contents of the vaccine. Until recent concerns about vaccine safety, nearly 94% of American children were vaccinated.

The contaminating aborted fetal DNA creates the potential for autoimmune responses. A group of researchers, Sound Choice Pharmaceutical Institute, has studied the effects of fetal DNA in vaccines. Preliminary studies have shown a link between DNA recombination and the autism-associated genes present on the X chromosome. The study produced more questions than answers, but it is clear that more study and openness is needed in the development of childhood vaccines.

Excerpted from "The President's Corner" in Pulse Line, Summer 2009 edition. Pulse Line is the official publication of the National Association of Pro-Life Nurses.

Posted by Island Livin' at 12:40 PM No comments: Links to this post

WASHINGTON – In his address to a joint session of Congress tonight, President Obama said, "One more misunderstanding I want to clear up -- under our plan, no federal dollars will be used to fund abortions."

Douglas Johnson, legislative director for the National Right to Life Committee, commented: "Barack Obama needs to learn that the mere repetition of a verbal formula does not change reality. The reality is that the Obama-backed House bill would explicitly authorize the federal government insurance plan to pay for elective abortions and would explicitly authorize subsidies for private abortion insurance -- and all with federal dollars, which are the only kind of dollars that the federal government can spend."

The National Right to Life Committee (NRLC) last week released definitive memoranda that demonstrate that (1) the "Hyde Amendment" would not apply to the new programs that would be created by the Obama-backed health bill, H.R. 3200, and (2) that all of the funds that would be spent on elective abortions under the bill, and all of the funds that would be spent to subsidize private insurance plans that cover abortion, would be "federal funds" in both the legal sense and in the sense in which those terms are used throughout the government.

"The claim that a federal agency would be spending private funds on abortion, not federal funds, is absurd on its face, a political hoax," Johnson said.

To read a September 8 NRLC media advisory that summarizes these issues, click here. The advisory contains links to the detailed memoranda that disprove the "Hyde Amendment myth" and the "government will spend private funds on abortions myth."

Related link:
Learn more about this issue at nrlc.org
Posted by Island Livin' at 2:21 AM No comments: Links to this post

Watch the video about this coverup below:

Posted by Island Livin' at 12:22 AM No comments: Links to this post

Washington, DC (LifeNews.com) -- The pro-life 40 Days for Life event has sparked a new groundswell of local grassroots activity in cities and towns across the United States. The campaign has grown to include international locations and the kickoff of the next event on September 23 is slated to be the biggest yet. Read more.

Related links:
Find the campaign nearest you at www.40daysforlife.com

Posted by Island Livin' at 12:13 AM No comments: Links to this post

Washington, DC (LifeNews.com) -- Millions of Americans will be reminded of the pro-woman, pro-life perspective when they take to the streets on Sunday, October 4. That's because thousands of pro-life advocates in cities and towns across the country will be there to share the message with them. Read more.

Related link:
Find the Life Chain event nearest you at www.lifechain.net
Posted by Island Livin' at 12:05 AM No comments: Links to this post

A New York federal judge has dismissed a lawsuit against the FDA, challenging the sale of the Plan B morning after pill to 17-year-olds. Read more.

Posted by Island Livin' at 12:02 AM No comments: Links to this post

Pro-life victory at an abortion clinic

While efforts continue to close the Nebraska clinic of late-term abortionist LeRoy Carhart, pro-life counselors have scored a victory. Read more.
Posted by Island Livin' at 12:00 AM No comments: Links to this post

President Obama speaks to the nation's students on Tuesday, and pro-life groups are asking them to make a symbolic response. Read more.
Posted by Island Livin' at 11:58 PM No comments: Links to this post

New information has surfaced regarding euthanization of elderly patients at a New Orleans hospital during Hurricane Katrina. Read more.
Posted by Island Livin' at 11:56 PM No comments: Links to this post

Doctors have saved the life of a Texas baby with an amazing surgery that allowed the baby to be half born called the Exit Procedure.
Read it here

Posted by EC Gefroh at 3:47 PM No comments: Links to this post

The Passing of a Real Hero 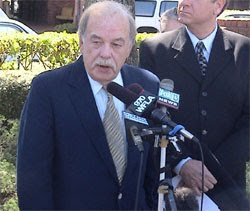 Today the pro-life movement mourns the loss of Mr. Robert Schindler, Sr., the father of Terri Schindler-Schiavo, whose fight for life captured the heart of the pro-life community in 2005. Mr. Schindler is being buried in Philadelphia today without the fanfare or accolades that are due a real champion who fought one of the most insidious evils of modern society - the legalized murder of the innocent. His funeral will not be televised on all the cable news networks, no cardinals will attend it, and the President of the United States will not deliver the eulogy - thank God. Mr. Schindler, however, is promised a better send-off than that. God Himself will him speak to him words spoken to all the suffering righteous: "Well done, good and faithful servant. Enter into the joy of your Master."

Posted by EC Gefroh at 11:28 AM No comments: Links to this post

Email ThisBlogThis!Share to TwitterShare to FacebookShare to Pinterest
Labels: Heroes

Posted by EC Gefroh at 9:42 AM No comments: Links to this post