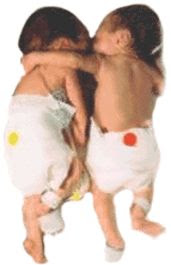 Kyrie and Brielle Jackson were born on October 17, 1995, a full 12 weeks ahead of their due date. The standard practice, that time, at The Medical Center of Central Massachusetts in Worcester, where the twins came into the world, was to place them in separate incubators in order to reduce the risk of infection.

Kyrie’s birth weight was two pounds three ounces. She gained weight quickly and slept calmly. Brielle, however, three ounces lighter than her sister, had breathing and heart-rate problems. The oxygen level in her blood was low, and her weight gain was slow.

On November 12, tiny Brielle went into critical condition. Her stick-thin arms and legs turned bluish-gray as she gasped for air. Her heart rate soared. The Jackson parents watched, terrified that their little daughter might die...

H/T to Donna.
Posted by EC Gefroh at 3:54 PM No comments: Links to this post

Email ThisBlogThis!Share to TwitterShare to FacebookShare to Pinterest
Labels: Babies

Amongst scientists who promoted the use of human embryonic stem cells five years ago, in the middle of passionate debates in the US, Australia and elsewhere, few were more influential in shaping the ethical debate than Harvard’s George Q. Daley. “We must support the vitally important applications of embryonic stem cells to medical research,” he testified to a Congressional committee in 2005.

He contended that work on hESCs was so important that it could not be delayed. It was needed for cures, drug development and genetic research. The fact that years had passed without results made no difference. “The field of human embryonic stem cell research is a mere 7 years old, so it is premature to expect successful cell therapies to have already been delivered to patients.”

Now, he has transferred the same sense of urgency and excitement to an ethical non-controversial alternative to hESC research which he dismissed before the committee – induced pluripotent stem cells (iPS cells). At the time, he said, “Although this strategy is worth pursuing, it is extremely high-risk, and may take years to perfect, and may never work as well as nuclear transfer, which we know we can practice today.”

However, in 2007 iPS cells were developed by Shinya Yamanaka. Professor Daley immediately stopped campaigning for hESCs. In an interview with Nature Medicine, he says, “Once Yamanaka solved the problem, I turned around virtually my entire program to take advantage of that breakthrough.” Read more.
Posted by Island Livin' at 1:35 PM 1 comment: Links to this post

Has assisted suicide made the founder of Dignitas a millionaire?

An investigation by the Swiss newspaper Beobachter has suggested that the assisted suicide business has made the head of Dignitas, Ludwig Minelli, a millionaire. Assisted suicide is lawful in Switzerland, but those assisting may not “selfishly” profit from the death. The Beobachter points out that Minelli declared that he had no taxable personal fortune in 1998, when he established Dignitas. Ten years lager, he has an annual income of about US$150,000 and a personal fortune of $1.8 million. How did he become so wealthy, asks Beobachter. Read more.
Posted by Island Livin' at 1:31 PM No comments: Links to this post


Sister Keehan angered many Catholics when she defied the U.S. Bishops and supported the pro-abortion healthcare bill. This petition simply asks Sister Keehan and the Catholic Health Association to support the Protect Life Act, which would remove all the objectionable abortion funding from the law.

Email ThisBlogThis!Share to TwitterShare to FacebookShare to Pinterest
Labels: Petitions

McConnell is a widely respected conservative constitutional law scholar who was nominated to the 10th Circuit Court of Appeals by President George W. Bush in 2002 and who since 2009 has headed the Stanford Constitutional Law Center. He is also an opponent of Roe v. Wade, a champion of social conservatives, and the man who argued before the Supreme Court on behalf of the Christian Legal Society, a student group that was denied funding and formal recognition by the University of California's Hastings College of the Law because it discriminated against homosexuals.

Read the rest here.
Posted by EC Gefroh at 1:56 PM No comments: Links to this post

In a disastrous chain of events, a set of “wanted” embryos quickly became “unwanted” after an artificially impregnated women was informed by her fertility clinic that they had accidentally implanted the embryos of another woman by the same name.

The woman’s solution was to take the morning-after pill (which, ironically, pro-abortion forces insist is simply a form of contraception and cannot cause an abortion) and abort the nascent life within her.

Read the rest here.
Posted by EC Gefroh at 1:48 PM No comments: Links to this post

Alert: Urge Senators to vote NO on "DISCLOSE" Act

Please take a moment to read this important alert from the American Family Association regarding the so-called "DISCLOSE" Act. This bill directly affects Hawaii Right to Life and other pro-life groups; our supporters; and all who want to uphold our Constitutional free speech rights.


URGENT: Contact your senators today - tell them to protect the Constitution and vote “NO” on the DISCLOSE Act

The badly misnamed campaign finance bill, the DISCLOSE Act, will strangle the voice of the AFA and other pro-life and pro-family organizations during election campaigns, right at the time our voices most need to be heard.

President Obama and the Democrats have already pushed this bill through the House, and will push it through the Senate in the next few days unless we intervene.

Although the bill will muzzle the voice of pro-family groups, Democrats carved out a special exemption for unions, the Sierra Club and the AARP, so the rules won't apply to them.

And the bill will go into effect just 30 days after it is signed by President Obama, just in time to silence our message before the fall elections.

To make sure it can't be challenged in court prior to November, the bill expressly prohibits expedited judicial review.

The Democrats know this bill is unconstitutional and will eventually be overturned by the courts. They don't care as long as it will help them this November.

In fact, Congressman Hank Johnson (D-GA) admitted on the House floor that the purpose of the bill is explicitly partisan (video here). He said that unless the DISCLOSE Act passes, "we'll see more Republicans getting elected."

The president and the Democrats don't want a level playing field this fall; they want one tilted steeply in their favor.

But when the Founders gave us the First Amendment, they prohibited Congress from making any law "abridging the freedom of speech," by which they meant freedom of political speech. They knew that a representative democracy can only thrive if it protects vigorous and robust public debate during election seasons.

This bill is so bad that even the ACLU has come out against it.

We believe this bill can be defeated in the Senate, but in order for that to happen, your senators need to hear from you today.

Please take a moment to contact your senators NOW and urge them to vote NO on the "DISCLOSE" Act:

Posted by Island Livin' at 2:36 AM No comments: Links to this post


H/T to Kathleen
Posted by EC Gefroh at 2:39 PM No comments: Links to this post

Matthew Hanley | On the Square, a First Things blog

The predominant Western approach to preventing the spread of AIDS in Africa has failed. Though in theory the risk reduction strategies favored by Western governments and aid agencies—handing out condoms, promoting counseling and testing, and treating other sexually transmitted infections (STIs) to block HIV transmission—can “work” in theory, they have not done so in practice. In Africa, despite years of promised improvements, they have not brought any downturn at all.

But a handful of African countries have actually forced down the AIDS rates, each of them by changing behavior—particularly reducing sexual partnerships—not through the heavily promoted risk reduction measures. Read more.
Posted by Island Livin' at 12:28 AM No comments: Links to this post

The new healthcare law has endangered longstanding protections on conscience. We must act to address them or risk creating a dangerous precedent. Read more at Public Discourse, the Witherspoon Institute blog.
Posted by Island Livin' at 12:20 AM No comments: Links to this post

How the Supreme Court nominee manipulated the statement of a medical organization to protect partial-birth abortion. Story from National Review Online.
Posted by Island Livin' at 12:17 AM No comments: Links to this post

Mother aborts baby because she cannot cope with morning sickness

You can read the article here. I found this article while reading Danielle Bean's article Mom So Sick She Chooses Abortion.
Posted by EC Gefroh at 2:40 PM No comments: Links to this post

Excellent show!
Posted by EC Gefroh at 3:58 PM No comments: Links to this post

Email ThisBlogThis!Share to TwitterShare to FacebookShare to Pinterest
Labels: EWTN

The leader of a group of orthodox rabbis in the United States has spoken out against the appointment of U.S. Solicitor General Elena Kagan, who is Jewish, to the nation's highest court.

Speaking on behalf of over 850 members of the Rabbinical Alliance of America, Rabbi Yehuda Levin said, "While any number of our co-religionists would represent the undeniable, historic Torah values shared by Orthodox and traditional Jews, we are devastated and broken-hearted by the choice of Elena Kagan."

"According to the Torah perspective adhered to by our 850-plus member Rabbis, as well as hundreds of thousands of Orthodox and traditional Jews, Ms. Kagan is non-kosher - not fit to serve - on the Supreme Court or any other court."

Read the rest of this LifeSiteNews article here.
Posted by EC Gefroh at 3:48 PM No comments: Links to this post