There are now 234 "Choose Life" License Plates on the roads in Hawai'i! Much ALOHA to all who answered our call of urgency, with a special mahalo to APCCC Founder Steve Holck who personally paid for the fees of close to a hundred plates for those who could not afford them.
Please remember that the battle for Life is far from over and we urge people to continue to purchase the Choose Life plates. We will be making this an ongoing program, and anyone who cannot afford the initial fee for the plates ($30.50) may email steve(at)alohapregnancy(dot)com for information.
Posted by Island Livin' at 9:31 PM No comments: Links to this post

A Story From the Abortion Mill by Fr. Don Hying 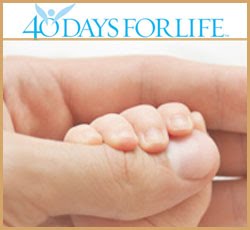 Anne of Imprisoned in My Bones shared a story by guest blogger Father Hying just in time for the 40 Days for Life. Spring Campaign.

Story from the Abortion Mill


With the 40 Days For Life starting this Ash Wednesday, now is the time for us to give public witness to our belief in the sanctity of nascent life. The abortionists want their deeds to go unseen, unnoticed and unchallenged. By our public prayer and presence, we shine the light of God on a very dark place.

Posted by EC Gefroh at 2:43 PM No comments: Links to this post

Email ThisBlogThis!Share to TwitterShare to FacebookShare to Pinterest
Labels: 40 Days for Life

Hospitals and nursing homes are becoming (or have already become) selective killing fields. POLST (Physician Orders for Life-Sustaining Treatment) is another in a long line of efforts to persuade people to refuse medical treatment. Living Wills and Powers of Attorney for Health Care (advance directives) have not been as successful in this area as their creators in the right-to-die movement had hoped they would be. Put quite simply, POLST protocols and laws are the “death with dignity” squad’s latest attempt to select those whose lives are viewed as “futile” in order to ensure their speedy demise. POLST forms are designed to limit the use of life-saving technology, life-sustaining treatment and even ordinary care, such as the provision of food and water. “Compassion” and “patient autonomy” are the alleged motives for promulgating POLST forms. However, a look at their origin tells a different story.

Analysis of the POLST movement “reveals that it is a national effort to manage and control death under the guise of compassion.” (Ethics and Medics, 6/2010, “The Danger of POLST Orders”.) The usual cast of characters is involved in this latest effort to advance the “right to die.” POLST was developed in the 1990’s by the Ethics group at Oregon Health & Sciences University, the group that also developed the Guidebook to the Oregon Death With Dignity Act (Oregon’s physician-assisted suicide law). POLST was developed with grants from George Soros’s Project on Death in America, as well as the Greenwall Foundation and the Cummings Foundation, all frequent sponsors of right-to-die organizations. Compassion & Choices (formerly the Hemlock Society) promotes POLST. (For more detailed information/a timeline, go to www.lifetree.org.) POLST was one of the outcomes of the Project on Death in America. On 11/9/2003, the Boston Globe (Carey Goldberg, Globe Staff) reported: “... the Project on Death in America, financed by billionaire George Soros and the Robert Wood Johnson Foundation, poured more than $200 million over the last decade into end-of-life programs and research.”

The POLST form differs from a Living Will or a Power of Attorney for Health Care (advance directives) because, once signed by a physician, it is the physician’s orders and may therefore be carried out immediately. Furthermore, the law governing advance directives, which requires two physicians to certify that the patient is capable of making medical decisions, will not apply to a POLST form. POLST leaves the patient wide-open for abuse. Read more
Posted by Island Livin' at 1:32 PM No comments: Links to this post

Hear our executive director Janet Grace all this week on "The World to the World" with Pastor Danny Lehmann, KLHT 1040AM. Broadcast Mon-Fri 5:54am and 1:54pm. Listen on air or online.
Posted by Island Livin' at 4:46 PM No comments: Links to this post

It should not surprise that I hold in low esteem a particular breed of man who, while claiming the name Catholic, supports openly and actively that wretched party of death. They fret over a folly, which they basely baptize as “social justice”, which inexplicably counsels the right of broadband internet access and condoms for the poor, while innocent life is extinguished by the millions at the cruel hands of the federally subsidized. In so doing, they weave for themselves a seamless garment as a shroud, befitting the whitewashed tombs they gaily inhabit.

Still, another breed of man occupies a rung on my ladder of loathing barely an amoeba’s head above the aforementioned—the armchair pro-life...

Read the rest over at National Catholic Register.
Posted by EC Gefroh at 4:20 PM No comments: Links to this post

Posted by EC Gefroh at 2:15 PM No comments: Links to this post